As you know there is a proposal by Cork City Council to commence the first phase of the city's Flood Defence Project in Morrison's Island and as part of these works there is also a significant Public Realm upgrade planned. Details of this scheme are attached below and please note the final date for submissions is now April 12th.

For the past twenty years or more the CBA has been calling for the installation of flood defences in the city. Cork now has committed funding from central government of €140million for these works to commence.

Anyone who knows Cork city will know that in a flooding event Morrison's Island is one of the first locations in the city to flood, the flood water then proceeds onto the South Mall and down Pembroke Street; Morgan Street; Cook Street; Marlboro Street; Princes Street towards Oliver Plunkett Street. If the threat of flooding can be controlled at Morrison's Island then a significant proportion of the city centre can be protected.

However whilst the CBA fully supports the Flood Defence Project for Morrison's Island we have a serious concern with a specific aspect of the Public Realm proposal for the area. That is the permanent removal of over one hundred and fifteen parking spaces along Morrison's Quay & Father Mathew Quay. This the biggest proposed loss of parking spaces certainly in recent times and will unquestionably have a negative impact on business in the city.

To discuss this in more detail and to ensure all businesses are aware of these developments we are holding an information evening in the Imperial Hotel at 6 pm on Wednesday April 4th. We are asking as many members to attend as possible as these parking changes will effect your business. We need City Council to fully comprehend the depth of concern amongst businesses regarding these changes. There must be an alternative to the parking aspect of this proposal which, if introduced as currently planned, will have a serious negative economic impact on a wide range businesses Retail, Professional Services, Hospitality etc.

We have invited representatives from Cork City Council to attend from the Roads and Environment sections who have direct responsibility for this area.

Please confirm your attendance by return email to info@corkbusiness.ie.

We look forward to seeing you Wednesday!

Cork people must keep faith in the events centre being delivered.

This was the message delivered by Ann Doherty, Chief Executive of Cork City Council, at an event this week on current Cork city developments.

A deal has been agreed in principle between the State, developers BAM and proposed operators Live Nation to provide the additional funding required for the project, but the deal is yet to be given the official go-ahead.

Speaking at the event in the Clayton Hotel, Ms Doherty said she was confident the project would get the green light, and urged people to be patient: “Enormous work has been carried out by Tánaiste and Minister for Foreign Affairs Simon Coveney and others involved to hammer out a deal in relation to the events centre,” she said.

“I remain and have always said that I am confident we will get this over the line.”

Ms Doherty said it had been discussed heavily in the media, but maintained that it was important for people to keep focused on securing the project for Cork.

“It hasn’t been easy, it’s been discussed by every newspaper, radio show, social media feed. But we need to stay focused on the prize; Cork needs an events centre. We are a city of scale, and we need that landmark building in order to attract things to our city. So I think we all need to stick with it, because that’s how we’re going to make it happen.

The ‘Cork City Revitalisation: People, Place, Progress’ event highlighted ongoing and future Cork city developments as well as the revival of certain quarters like the South Parish and Victorian Quarters.

More than €700 million is currently being invested in Cork’s city centre by private and public sector organisations. The developments include a number of multi-functional sites encompassing retail, office, education, culture and tourism. 30 new sites in the city are in development or in the pipeline for development this year. 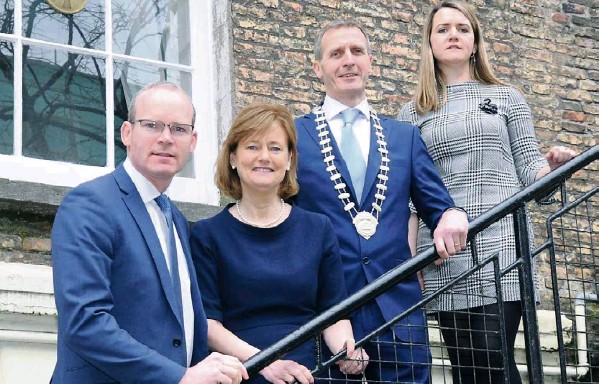 Trade in Cork city centre was down more than 60% as a result of Storm Emma, which forced the city to effectively close down for 3 days.  Re-opened for business this week, retailers, publicans, and traders were keen to hear from An Tánaiste & Minister for Foreign Affairs Simon Coveney TD on another key issue affecting trade, the impact of Brexit on Cork businesses.

“We are well represented by Minister Coveney at the Brexit negotiations, which are again at a critical stage. It is vital for businesses to have clarity on current developments at the negotiating table and what they mean for the future of the UK’s relationship with Ireland and the implications for Irish business, particularly local businesses. Time, as we know, is marching on, and we all need to be using this time wisely to prepare for Brexit.”

An Tanáiste provided insights and information to Cork businesses for over 30 minutes and answered all questions arising from the floor on the challenges and opportunities for Cork in a post-Brexit environment.

“Certainty for businesses with a clear transition timeline, up to 2020, is vital so they can plan and prepare for Brexit and we are working specifically to this agenda during the negotiations,” said Minister Coveney TD at the CBA Brexit Briefing.

Attendees also heard from Ireland South MEP Deirdre Clune who gave the perspective of the European Parliament, which will ultimately ratify the Brexit agreement between the UK and the EU.

This year's Cork St. Patrick's Day Parade will take place in the heart of the City on Saturday, March 17th 2018.

Celebrating the theme of Democracy For All - 100 Years of the Vote for Women, join us in the City Centre for a carnival of colour, music,  pageantry and comic fun.

We wish to inform you of Road Closures which take place to facilitate the Parade.  We apologise for any inconvenience caused due to these road closures for this civic event. If you have any queries, please contact Cork City Council at  021-4924116.

Saturday 17th March from 07:00 to 16:00
Roads will open when safe to allow access, which could be in advance of advertised time.

Saturday 17th March from 10:30 to 16:00
Roads will open when safe to allow access, which could be in advance of advertised time.

Saturday 17th March from 11:15 to 15:00pm
Roads will open when safe to allow access, which could be in advance of advertised time`

Saturday 17th March from 11:15 to 17:30
Roads will open when safe to allow access, which could be in advance of advertised time

Please note there will be lane restrictions on both Clontarf Bridge & Eglinton Street to restrict access onto Terence McSwiney Quay. This will also commence at 1100hrs

In addition, the following main streets will be directly affected and will be closed from 11.15am

Traffic diversions will be put in place to facilitate these road closures, as follows:

CITY planners have given the go-ahead for another hotel in the city centre, providing a further boost to the city's growing tourism trade.

Plans for the construction of a 73-room hotel in the Victorian Quarter were given the green light in recent days.

The development is planned for the corner of MacCurtain Street and York Street on the site of the Windsor Inn.

It will see some 90-bed spaces provided once the development is completed and incorporates the partial demolition of the existing building and the construction of an eight-storey hotel with a bar facility on the ground floor with an external courtyard along with a basement level.

The development is just one of several planned for the area, with city planners also set to make a final decision on the Metropole Hotel plans by next week.

Owners Trigon Hotels Ltd have sought permission to redevelop the iconic hotel in a multi-million euro plan which includes the construction of a new, urban hotel called 'The M.'

Once finished, the development would have more than 400 hotel beds.

It is one of several major hotel developments planned for Cork city in the coming years, with the new Maldron nearing completion on South Mall.