The ambitious plans also include almost 3,000 sq m of restaurants and retail, as well as a significant investment in the city's public realm.

The project is to be developed by HQ Developments Limited, a joint venture by Clarendon Properties and BAM Ireland, with a planning application due to be submitted this week.

It marks the latest stage in a two-decade long saga to redevelop the unused site at Horgan's Quay, adjacent to Kent Railway Station.

The office, retail and residential project will sit on 6.1 acres, including some 160 metres alongside the River Lee.

The Horgan's Quay development could be one of Cork's biggest employment hubs when completed.
Plans include three office blocks, with space for up to 5,000 employees.

A 136-bed hotel, including a rooftop restaurant, is planned for the Lower Glanmire Road side of the side, while some 2,900 sq m of restaurant and retail space is proposed for the new development.

Developers have planned to restore three significant buildings on the site: the Station House, the Carriage Shed and the former Goods Shed, while provisions have also been made for some 5,000 sq m of public realm enhancements to better link Kent Railway Station to the city centre.

Tony Leonard, managing director of Clarendon, described the development as 'key to unlocking the future development' of the city's docks.

"This development presents Cork with an excellent opportunity to provide centrally located Grade A offices, residential and hotel accommodation together with ancillary retail and restaurant facilities in the heart of the city," he said.

"As the provision of high quality residential accommodation is a major factor in attracting new office tenants to the city, preference will be given to these tenants for the private rental accommodation in the development."

Theo Cullinane, CEO of BAM Ireland, added, "In addition to opening up an old industrial area of the city to habitable and public friendly space and enhancing the River Lee as a public amenity, this investment is creating much needed residential and office space and, indeed, jobs for Cork."

Cork Business Association welcomed the announcement of the development, describing it as a 'critical' site in the city centre.
CBA CEO Lawrence Owens said, "We are pleased to see a broad mix in the proposed plans for the site incorporating office, retail, residential, hospitality, plus an extensive public realm space fronting the River Lee.

"Cork city must continue to develop its infrastructure in order to be an effective counterweight to Dublin and projects such as Horgan's Quay will ensure Cork has the framework in place to attract FDI and obtain whatever opportunities that the fallout from Brexit will bring.

"However we are only too familiar in Cork with proposals that never come to fruition, our desire is to see cranes in the skyline along Horgan's Quay in the very near future and this exciting and transformative project underway."

If planning is approved, it is expected that construction will commence in 2018. 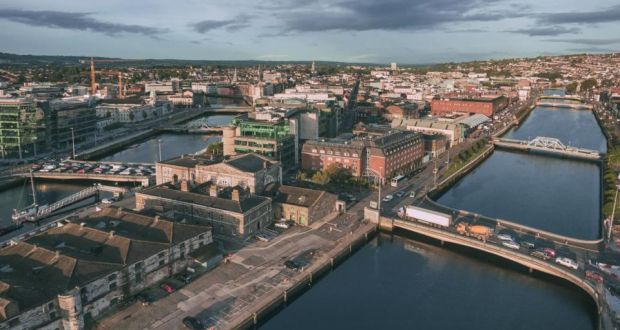 The Government is soon set to make two critical, once-in-a-generation, decisions about the future of Cork. The outcome of these dual major public policy choices on the horizon for the state’s second city will dictate the shape of development and the scale of ambition for Cork, as well as the economic prospects for the entire southern half of the country.

The first of these is the role the Government’s new National Planning Framework assigns to Cork as part of its emerging spatial strategy, while the second relates to the shape of the new local government arrangements in the city and county. These decisions are pivotal public policy moments, which will have national as well as local implications. These are not merely local issues; they are in the national interest because Cork is Ireland’s only realistic prospect for delivering an alternative growth centre to the greater Dublin area.

Both of these issues have been subject to years of research, consultation and deliberation. The Government has put huge effort and resources into these processes, and there is now a clear prescription for what needs to be done; in summary, this means developing the Cork city region as an urban centre of national and European significance – with a metropolitan-scale governance structure to match.

International observers such as the IMF are becoming especially interested in the effects of an overheating Dublin and the underperformance of our second-tier cities.

What is becoming clear is that there is now a major expectation that Cork will play a central role in anchoring an alternative development framework for the entire country. However, this expectation is accompanied by a sense that Cork now needs to step up to the plate and demonstrate that it is ready to fulfil this role.

The city continues to perform very strongly in economic terms, and has retained its role as the country’s second economic powerhouse through the recession and recovery; the city centre and the docklands area in particular are belatedly responding to the huge opportunities for regeneration and development.

This is crucial – after all, a successful city centre is absolutely central to the success of the surrounding area and for fulfilling the region’s role as a counterbalance to Dublin. There are now numerous active and imminent projects in the commercial office, residential, hospitality, educational, tourism and retail sectors; by my calculations, there is about €1 billion of private sector development investment under way or in the planning process for 28 substantial projects in the city’s core and the docklands area. However, the State needs to secure this momentum by investing sufficiently in municipal infrastructure to ensure that the city provides the necessary backdrop to support such growth.

If Cork has any ambition to develop as a metropolitan scale city-region of European significance, it urgently needs new governance structures to reflect those aspirations. Cork’s administrative boundaries are out of date and increasingly problematic in terms of efficient and united territorial and economic management; spatial and environmental planning; and local democratic coherence. The city authority is severely constrained in managing its functional constituency, while the county authority is forced to oversee this urban overspill while at the same time managing an extremely large and diverse territory. This was the overwhelming conclusion of the recently published report by an advisory group chaired by former chief planner for Scotland Jim Mackinnon, which is now being advanced to implementation stage. 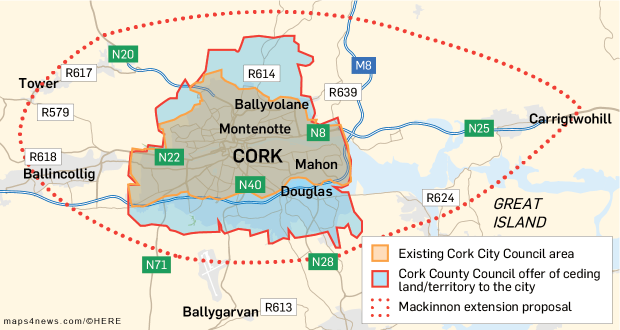 An appropriately located boundary will allow Cork to institute governing arrangements that allow it to plan and prosper as a strong and dynamic city-region, competing effectively with its European counterparts. The precise location of the boundary distinguishing an enlarged city and county area has been subject to much discussion, and Cork County Council is understandably concerned about the financial and logistical implications of a substantial boundary extension. There are, however, clear legislative mechanisms in place that are designed specifically to accommodate such changes, which will ensure that both local authorities in Cork are on a sound, sustainable financial footing.

Cork city should have a rate base commensurate with its size and standing as an urban centre. This will allow the city to help drive regional economic development and investment and to evolve as a real counterbalance to Dublin. Cork county will continue to function as the largest local authority outside the greater Dublin area, with a strong mix of metropolitan, urban and rural economic functions. All of theses aspects have their own particular economic profiles, with important industrial, commercial, agricultural and tourism services that produce rateable income – including one of the most important clusters of economic activity in the entire State in Ringaskiddy/Cork harbour.

Cork performs so strongly at an international level – the region’s GDP in 2014 for example was double that of the EU average (euro per inhabitant) and ranks in the top 5 per cent of EU regions in economic performance. This is a testament to the strong partnership between city and county councils, which created the conditions for this remarkable but often overlooked regional success story. It is time now to recalibrate and renew this partnership and make sure that both councils are governed in such a way that protects their best interests, and which secures the joint approach to the city region’s planning and development.

Cork’s success and prosperity is thus clearly aligned with the State’s basic economic interests, and it is clear that Ireland needs Cork more than ever to drive the regional development agenda for the southern part of the country. Equally, Cork needs explicit public policy supports to complement its credentials as Ireland’s key opportunity for effective regional development.

Another hugely successful Feel Good Friday took place on August 25th with High Hopes Choir and Cork City Samba Band stealing the show! They fought off some tough competition though from our Lord Mayor, Tony Fitzgerald, who stepped up to the mic and blew us all away.

There were smiling faces all round on the boardwalk on South Mall with the fantastic team at Electric serving delicious nibbles to keep the crowds energy up so they could dance on a little longer.

With a little help from a few shaking buckets, we are delighted to announce that an incredible €500 was raised for the very worthy Cork Penny Dinners.

We would like to take this opportunity to extend our thanks to everyone involved in ensuring the event was a success - the outstanding entertainment, the very generous team at Electric, local traders who so kindly ran exclusive Feel Good Friday promotions, everyone who continues to support the Feel Good Friday initiative and a huge thanks to those who reached into their pockets to donate to a very worthy cause.

Here's some of our favourite moments from the event.